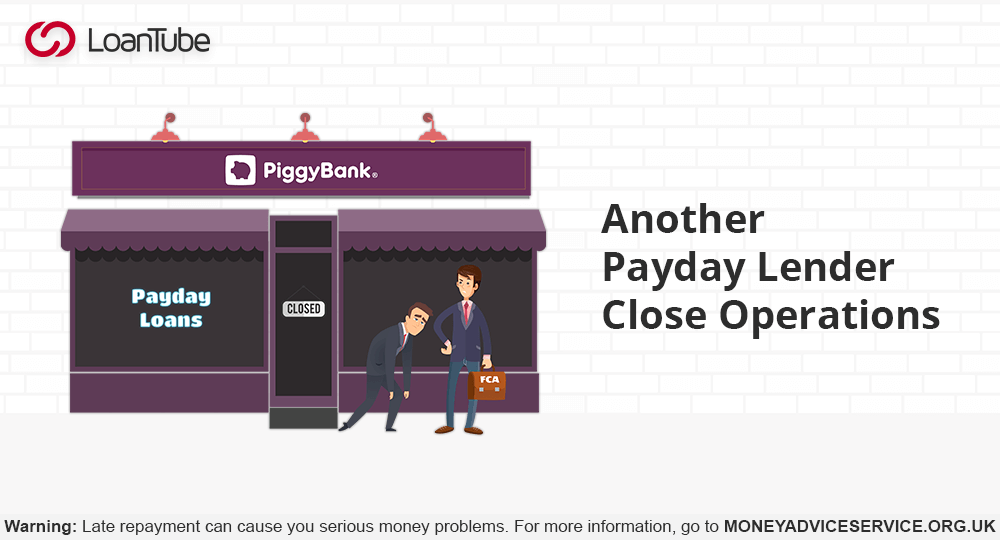 PiggyBank is the latest lender to go bust, in what could be a further signal that the end of the payday loan shark is near. ⭐Payday Lending ⭐Industry Update

The lender joins a long list of payday loan companies who have fallen on hard times over the past 12 months, much to the delight of many anti-payday loan campaigners.

PiggyBank was a payday lender which specialised in lending borrowers with poor credit between £100-£1,000. The firm went into administration on December 5th. They have confirmed on their website that all new lending activity has ceased.

PiggyBank would offer individuals small loans for up to five months and charge very high-interest rates of between 1,255% and 1,698% APR.

The Bournemouth-based firm was part of DJS (UK) Limited, a fin-tech company which develops products and solutions for the financial sector.

What Went Wrong for PiggyBank?

The news will not come as a surprise to most. The struggling lender was temporarily banned from handing out money in July this year after the FCA had concerns it could be lending irresponsibly.

The FCA raised issues about the firm’s poor affordability checks and referenced vulnerable borrowers who may not be able to pay back their loans. All responsible lenders are obliged to carry out thorough credit checks on all applicants before lending them money, to ensure that the borrower can afford the repayments.

The FCA was concerned that the checks PiggyBank were carrying out were not thorough enough. This led to a flurry of compensation claims against the lender from aggrieved customers who felt they were mis-sold loans they could not afford.

Administrators have not yet gone into detail about the cause of PiggyBank’s demise. However, The Guardian is reporting that PiggyBank’s financiers were unwilling to invest more money into the company after the FCA suspension was lifted in September.

The news may not be a surprise. However, it will leave a sour taste in the mouth of the 45,000 borrowers who are currently on PiggyBank’s books. Those who still owe money to PiggyBank are being advised to continue their repayments to the nominated bank in order to keep their credit score in order. Failure to do so may harm their credit score.

In addition to this, many individuals with compensation claims are eagerly awaiting their fate. Those with claims will add to the long list of creditors that are owed cash. And will most likely fall behind bigger lenders like banks and investors who will be paid first.

It is unfortunately not clear how much money those customers who lodged a compensation claim will receive after the company is wound down.

PiggyBank has, however, stated that their company’s customer service team remain available to assist existing customers with any queries. In regard to the compensation claims, they have stated:

Those customers with complaints (whether on grounds of affordability or other) should continue to approach the Company in administration. Any such claim will be treated as an unsecured creditor claim. These should be sent to complaints@piggy-bank.co.uk

Borrowers are also being advised to be aware of scams. Fraudsters often use opportunities like this to prey on individuals by pretending to be someone from PiggyBank or their administrators. Ensure you do not hand over any bank or personal details to someone over the phone.

Is This the End of the Payday Loan?

The PiggyBank news comes weeks after the UK’s largest payday lender, CashEuroNet, collapsed in October 2019. This took its brands QuickQuid and On Stride with it. Weeks after this, another well-known payday lender, 247MoneyBox, went into administration.

A lot of these payday firm failures can be attributed to the market. Because they never really fully recovering after Wonga’s collapse in August 2018. Many of the companies being put into administration are facing similar compensation claims by customers who believe they have been mis-sold a loan they could not afford.

Could this be the end of the payday loan? Pete Tutton, the head of policy at debt charity, StepChange, stated that there had indeed been a drop in the number of individuals struggling with payday loans after the flurry of administrations. However, there still remains a problem  of families struggling for credit, particularly those with poor credit ratings. He stated:

While this reduction in harm is welcome, lower-income households will still need access to safe, suitable and affordable credit from time to time.

Whoever forms the next government needs a comprehensive strategy that provides greater access to affordable credit safety nets for the most financially vulnerable, including the full introduction of a no-interest loan scheme.

One thing is for sure – payday lenders will have to reinvent their product if they are to remain sustainable. Many borrowers are becoming much more savvy about any potential mis-selling.

At LoanTube, we understand that firms like PiggyBank and Wonga are set up to work against the borrower. We know that these loan sharks are hounding innocent borrowers with huge interest rates. Meaning when you can’t meet their repayments you are threatened and harassed. Many feel trapped by spiralling debt.

The FCA are rightly cracking down on loan sharks and it is clearly having a positive impact. However, as soon as they plug one leak, another one takes its place.

At LoanTube, we will do everything we can to make sure you find the right financial product. We do this by matching you and your credentials with the perfect lender.

The application process is quick and easy. We also compare actual APRs and interest rates, so what you see is what you get.

Whether it is to tide you over for 12 months or to consolidate any existing debts, our comparison tool can help get you on your way to the perfect lending scenario.