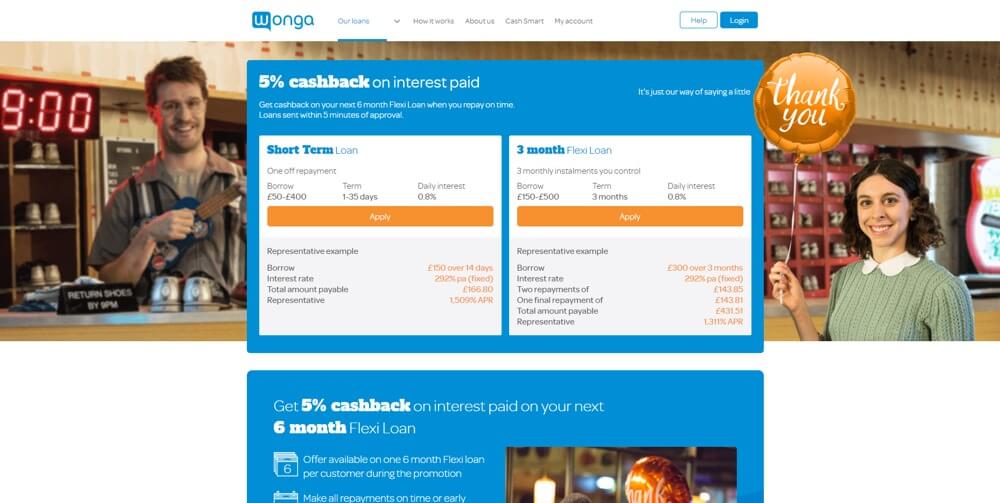 ⭐Wonga announced that they will not accept new payday loan applications. Read more to know what are the options left for you and how LoanTube can help.⭐

Well-known payday lender, Wonga, has recently announced that it will no longer accept any new loan applications amid reports the firm has entered into voluntary administration.

This means that Wonga is now no longer able to repay their own debts and, as a result, it has been placed into the hands of an independent administrator to decide its fate. Over the coming weeks, administrators will decide whether the company will be able to continue trading or to wind the business up. In the meantime, borrowers will not be able to apply for credit through Wonga.

The past few years have been tough on Wonga with shareholders attempting to rescue the company with a £10 million cash injection just last month. Wonga said this investment was necessary for the company to cope up with the recent surge in customers seeking compensation for loans taken out before Financial Conduct Authority guidelines were introduced in 2015.

It was confirmed that a vast majority of these claims related to loans taken out before 2014. At this time, the company came under scrutiny for both what critics called their “disproportionately” high-interest rates and marketing tactics that were said to unfairly target borrowers who were more vulnerable.

These compensation claims previously resulted in Wonga being ordered to pay more than £2.6 million to around 45,000 customers in 2014 following reports the firm sent threatening letters from non-existent law firms.

Later that same year, Wonga was forced to write off £220 million in debts and interest for a further 375,000 of their borrowers whom the company admitted should not have been accepted for credit. Lenders are required by law to carry out strict affordability checks to ensure borrowers can comfortably afford their loan repayments without causing serious financial hardship. Wonga failed to do this and was penalised by the authorities as a result.

In 2015, Wonga reported that its losses amounted to more than £80 million. Over the next year, they started to reduce their debt level but the company still made a loss of nearly £65 million. The company was hopeful that they were on track to return to profitability in 2017 but it suffered a severe security breach the same year.

As a result of this breach, cybercriminals stole data of more than 245,000 Wonga borrowers in the UK; further damaging the reputation of this lender against whom the Church of England has launched a campaign.

One of the main causes of Wonga’s demise, however, was the price caps placed on the short-term loan industry by the Financial Conduct Authority in 2015.

Wonga and the Financial Conduct Authority

Back in 2015, the Financial Conduct Authority (FCA) introduced a series of price caps to protect consumers from the extortionate interest rates and fees implemented by a number of less reputable loan providers.

These new rules mean lenders can charge no more than 0.8% of the original loan amount in interest and fees. On top of this, additional charges can no longer exceed £15 and the total amount a borrower has to repay will not cost more than 100% of the loan amount.

That means if a customer borrows £150, the most they will ever need to repay the loan company will be £300. Wonga’s interest rates and fees were, in general, as much as was allowed by the FCA.

While many embraced the changes that protected the UK borrowers and encouraged responsible lending in the industry, Wonga (who had previously relied on interest rates of more than 5,853% APR to turn a profit) found their business model struggling under the change.

Their latest maximum interest rate stood at 1,509% for a 14-day loan; costing borrowers £16.80 for a loan of £150. Historic claims from before the caps were introduced have largely contributed to Wonga’s entrance into voluntary administration. With processing costs to the company averaging at approximately £550 per claim whether the claim is upheld or not, Wonga’s profits have been greatly damaged.

What Does This Mean for Wonga’s Existing Customers?

While Wonga heading into administration has meant they are no longer accepting any new clients, hundreds of customers may still have a loan out with the company. Administrators have now taken over the running of Wonga, which means that the repayment side of the business is still operating as normal.

The Financial Conduct Authority is on the scene to ensure customers receive fair treatment and added that Wonga borrowers “should continue to make any outstanding payments in the normal way. All existing agreements remain in place and will not be affected by the proposed administration.”

There is still a possibility that Wonga could attempt to raise funds by selling any uncleared debts on to third parties, however, nothing has yet been decided. If Wonga decides to sell these debts on, there will be no change in prices or interest for existing customers.

A Loan Broker you can Rely on

Gillian Guy, chief executive of Citizens Advice, said, “While many of these problems are from before 2015, people still come to us after being sold loans they cannot pay back because rules on affordability are simply not good enough.”

She added that since the FCA’s rules were brought in the Bureau “now see half the number of payday loan problems that we did in the dark days before the cap on interest and charges, so we know this type of regulation works.”

At LoanTube, we compare offers from a network of reputable loan providers to ensure you get access to a loan that works for you. All of the providers that we work with are FCA authorised loan providers, which means that there are no “loan sharks” to worry about.

The way it works is, when you fill up the loan application on LoanTube, it enters all your details, into our clever computer system which then process it with pre-defined eligibility criteria by all our partner lenders. It then crunches the numbers and it matches you with the right lender(s). And this all happens in real-time.