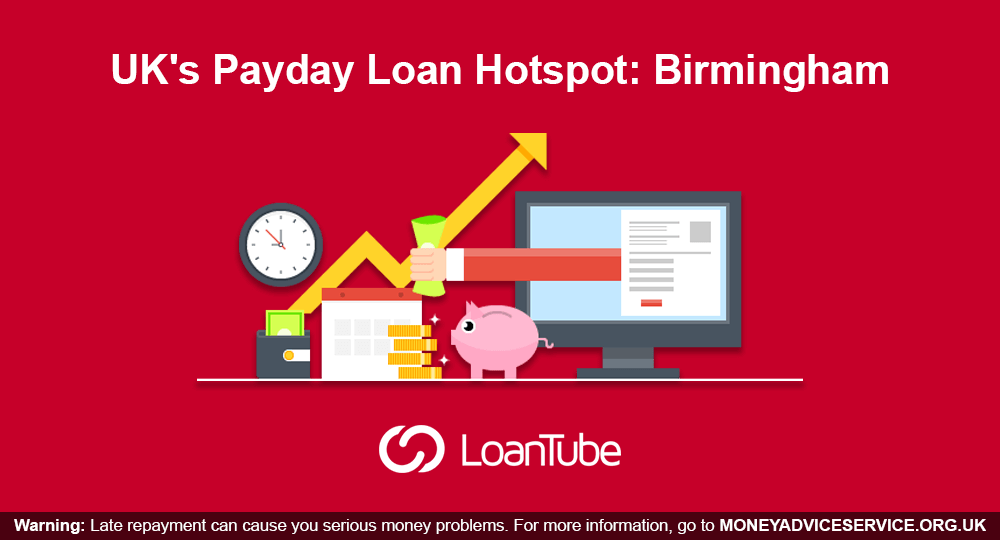 Understand the ever growing Payday Loans and Short term loans market in the city of Birmingham in the UK. ⭐Read Facts ⭐Apply online at LoanTube ⭐Borrow wisely

£1,077,292,050 – one billion, seventy-seven million, two-hundred and ninety-two thousand, and fifty pounds, that’s how much Brits took out in high-cost short term credit (HCSTC) finance in 2018 across 4,382,018 loan accounts. There’s no doubt that, no matter what politicians or campaigners may feel about them, that payday loans and short-term instalment loans are fully lodged in the minds of UK citizens as everyday finance products just like credit cards and overdrafts.

The figures in this article are available for download from the Daily Mail website followed by a Freedom of Information request and the LoanTube team examine what they mean and why it shows more than ever that it’s important to compare payday loans and to compare short-term loans.

Birmingham residents borrowed more on payday loans and short-term loans than from any other town or city in the UK. 146,176 loans were taken out by the city’s 1,073,000 citizens (source: Live Population) – that’s 1 loan account for every 7.34 residents. Across the Midlands, £105m worth of HCSTC loans was taken out by consumers looking for a short-term cash boost.

The rest of the list is dominated by Britain’s major urban areas including Manchester, Sheffield, Newcastle upon Tyne, and Glasgow.

People in Croydon borrowed more money per head of population with an average loan per capita of £29 in 2018. The highest average loan amounts were dominated by locations in London and the South East of England because of, according to This Is Money, the higher-than-standard costs of living in those areas.

Ilford Residents Took Out the Largest Loans in the UK

Residents in Ilford borrowed more per average loan than any other part of the UK with the average loan size exceeding £300, the only area in Britain to break this level.

The appearance of Shetland third in the list surprised many considering the fact that it has the lowest level of child poverty in Scotland (source: ShetNews). Speaking to the paper, Paula Dunn, the assistance office manager of the Shetland branch of the Citizens Advice Bureau, said that “the impact of poverty on issues like transport, fuel poverty, and the affordability of goods is likely to be felt more keenly…I am concerned that national funding to close the attainment gap in schools does not recognise the reality of island poverty.”

How the Market Has Changed in the UK

The payday loan and short-term loan market have grown substantially in the last 15 years. Before the great financial crash of 2008-2009, a quarter of a million Brits took out short-term loans every year. Moreover, the resulting squeeze on British pay packets over the following decade meant that the number of people needing to take out short-term finance shot up in 2012. The payday loan market was a sixth of the size of the enormous credit card market with the average person taking out HCSTC loans having £1,200 on account at any one time.

Whenever a market grows substantially and with little regulation, things often go wrong and they did with the payday loan market. Headlines like “The payday lender that charged 16,734,509.4%” in the Guardian were common – even the head of the Church of England pitted himself against the sector at the height of the controversy.

Something had to change – and it did. The Financial Services Authority, widely discredited for lax regulation which led to the financial crash and the unregulated growth of the HCSTC sector, was disbanded and it was replaced with the Financial Conduct Authority (FCA). From the off, the FCA meant business and one of its first acts was to regulate the HCSTC market much more intensely than the rest of the credit sector.

The major charges were that:

One-third of HCSTC lenders left the market immediately – did you know that, before the new regulations came in, there were 1,400 payday loan shops on the High Street and now there are only 500?

For many people, especially politicians and charity campaigners, the change in the payday loans and short-term instalment loan markets was a victory for consumers. Therefore, in many ways it was – consumers paid less for payday loans and short-term instalment loans than before but there was still enough companies offering them to make the market competitive.

Unfortunately, something has come along to take its place and it’s already causing worry to the FCA who have made recent noises about clamping down on it. What is it? It’s guarantor loans.

Guarantor loans don’t meet the FCA’s criteria of what HCSTC loans are so they don’t have to abide by their rules. The FCA have expressed alarm over the rise in guarantors stepping in to pay loans off as the primary borrowers struggle to meet their repayments. A crackdown is promised.

LoanTube believes in empowering the borrower and giving a lender the peace of mind that they’ll get their money back. To hit this perfect balance, we’ve got to find a loan for you that’s manageable and affordable.

We’re about you and putting you in control. And one important thing about being a borrower-centred broker is to make sure that the valuable friendships and relationships you have aren’t affected by your financial arrangements. That’s why we only offer payday loans and bad credit loans with no guarantor requirement.

To find out the best deal we can provide you with, please click here.