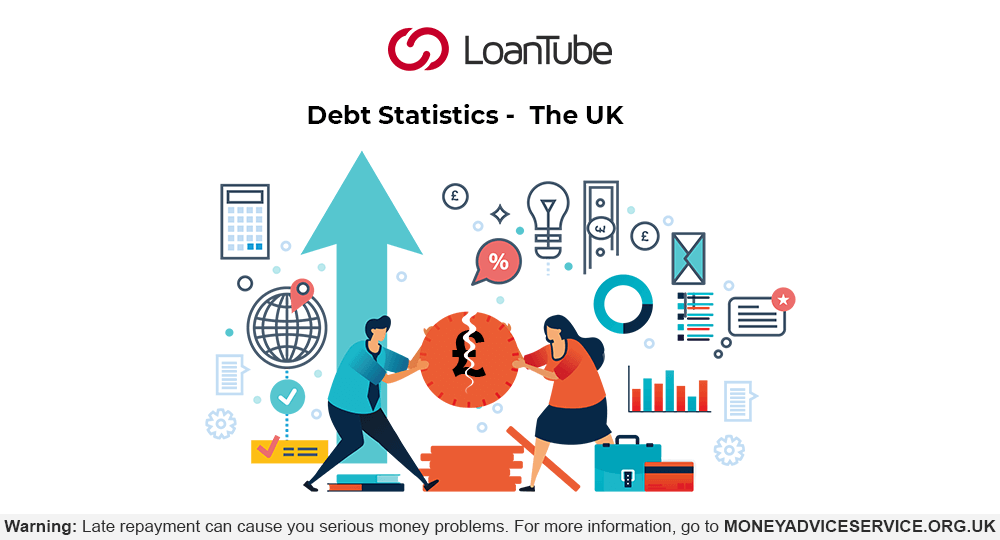 British residents now have £45bn more personal debt than they did a decade ago, representing a 25% increase.⭐Personal Loan ⭐Debt Statistics

Debt is on the rise in the UK and the trend shows no sign of slowing down any time soon. Figures released last week by the trade association for UK banking and finance, UK Finance, make for bleak viewing for many households up and down the country.

Repayments, however, continue to offset the increase in credit card spend. This means that borrowing on cards has risen by just 2.4% year-on-year. The outlook here is positive, after a slowdown of the trend since a 6.6% high in October 2016.

In a separate report in December, The Office for National Statistics showed a similarly bleak outlook for UK Debt. Their report, which takes into account figures from April 2016 – March 2018, showed that total household debt in Britain was £1.28trillion. £119billion of this was financial debt, with property debt attributing to £1.16trillion (91%).

Even more worrying is the forecast given by The Office for Budget and Responsibility. In March 2019 they produced a report which forecasts household debt to reach £2.425trillion by 2023-24.

The figures will paint a familiar picture for many across the UK who are living with debilitating debt. StepChange, a debt charity, has recently estimated that over three million individuals have fallen behind on an essential household bill in the past 12 months. Sue Anderson, head of Media there, stated:

These statistics reflect much of what we’ve seen over the past few years.

Over time, the constant use of rolling credit has become hardwired for many households, something that has prompted the Financial Conduct Authority to bring in new rules that all customers in persistent debt must try to increase their payments.

The new rules mentioned by Sue relate to the FCA-enforced credit card debt rules which are coming into force this year. If an individual has been in debt for 36 months or more, banks are obliged to cancel their credit card. This is after the bank has got in touch and provided the individual with a repayment plan to pay off the debt over time. The rule has been created in the hope that those who are in long-term, continuous debt can begin to pay off what is owed overtime.

What do the Experts Say?

Experts are also wary of reading too much into the increasing figures. While they may be alarming, many have stated that context is required to fully understand the stats. Sarah Coles, finance analyst at Hargreaves London stated:

The figures are skewed slightly by the £32bn of student debts – which the vast majority of graduates will never pay back in full.

She did, however, raise alarm in relation to those who are struggling the most in the UK:

Not all of these debts are the same: there’s a world of difference between taking an affordable, low-cost loan for vital home improvements, and living on your overdraft month after month because it’s proving so difficult to make your salary stretch to the end of the month.

Regardless of how we analyse the figures and their context, it is clear to see that the trend for UK debt is increasing. How the City watchdog, the Government and other financial bodies manage a country that is increasing their borrowing on credit cards and personal loans to make ends meet will be crucial over the next few years.

Why is the UK Debt on the Rise?

There are various factors to take into account when thinking about the causes of increasing debt. A good start, however, is the fact that credit has become cheap again. To put this into perspective –

This means that it is simply more lucrative to potential borrowers as the cost of the loan is cheaper. Over the past ten years, banks have offered lower interest rate loans in order to entice borrowers.

In another move to attract borrowers, throughout the decade banks increased their offering of 0% credit cards. At the peak, some of these deals saw consumers offered 43 months 0% credit.

In recent months, the banks have begun to draw back on this offering. Data is now showing that banks have cut back on these zero-interest credit card deals which lure in borrowers, with the number available on the market sitting at a 13-year low. This is due to the lenders fearing a potential debt bubble, drawing similarities to the financial crisis of 2008. The best 0% credit card on the market is currently for 29 months.

In addition to banks attracting new consumers with lucrative deals, we are seeing record levels of employment in the UK, which could be sparking confidence in borrowing due to the ability to make repayments.

This could also explain why banks are handing out more mortgages. There were an extra 2,000 first-time buyers each month getting their foot on the property ladder last year, with the return of the 90% loan-to-value mortgage. We may be seeing banks more confident in lending due to the security of increased employment throughout the UK.

It can often feel a little bit daunting looking for the perfect loan, especially in the current financial climate. You want to ensure you are getting the best possible deal, while also staying away from any loan sharks.

At LoanTube, our loan comparison service is free for you to use. We compare personal loans with real interest rates across a range of our lending partners. This means we can match you with the perfect loan. We use a soft credit check throughout the application process, meaning our service will not harm your credit score.

To get a free, quick quote today, enter your how much you want to borrow on our application form here.

PrevPreviousFears of “Debt Bubble” Spark Crack Down on Lending from Banks
NextThe Cost of Love – How Much Does Your Pet Cost You?Next