Low Consumer Spending is a Sign for a Falling Economy? 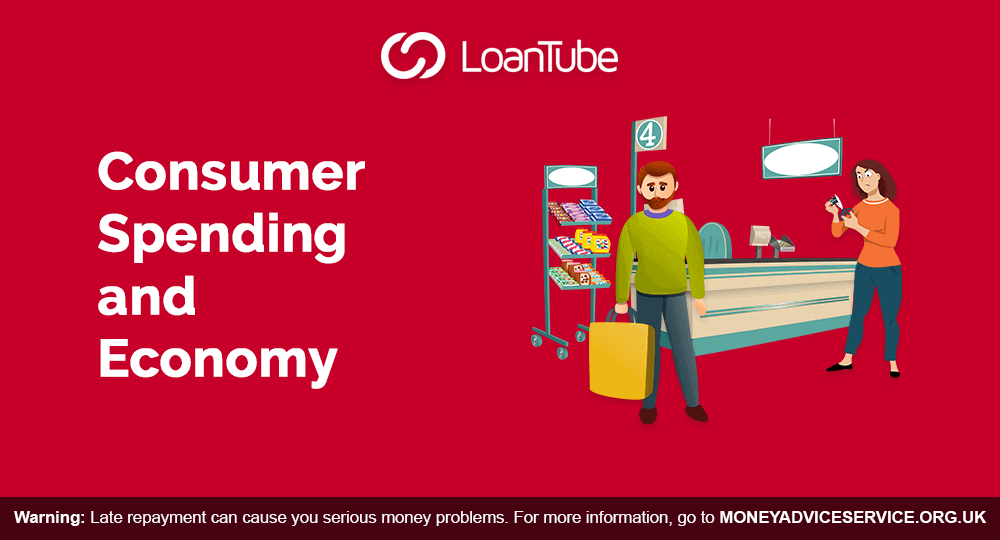 A country’s economic development and output are measured by consumer spending behaviour. With the index sinking low, is Britain heading towards another economic meltdown? Read this article to delve deeper into facts and insights. ⭐Finance & Economy ⭐Consumer Spending

Consumers are always the one ruling component of an economy. Precisely, they are at the centre stage playing the most prominent role. Most of the developed and still-developing nations stress on reforming consumer policies to drive the economy. They play a pivotal role in the trade and market. Whether it is a cross-border transaction or an internal market trade – consumers are the significant agent who shapes and defines the growth of a nation. It is more than a decade since the Great Recession impacted the acceleration of growth of several countries. Consumers across the globe were resilient to the shock and spent money on goods and services to help the economy recover from the impact of the downturn.

The Golden Age of Consumption helped the nations to get back on the track sooner than expected. People embraced the new technology that helped them buy everything at the tap of their fingers. Massive growth in consumer spending led to a rising economy. The United Kingdom also had a speedy recovery. Since the Referendum of 2016, the country has been through many peaks and valleys. In this article, we will delve into the consumer spending pattern and how it is affecting the economy of the UK.

Key Points of the Article:

Consumer spending, otherwise known as consumption expenditure is the consumption of goods and services by households. Generally, there are two types of it, namely, (i) induced, and (ii) autonomous. Induced consumption varies with the disposable income of a household. While the consumption that occurs even if a family has zero income is autonomous. The economy of Britain started voyaging on rough tides due to record-level unemployment rate and sluggish wage growth. It is the most important driver of economic growth as it accounts for more than 60% of the GDP. A consumer spending index portrays the degree of confidence shown through savings and spendings. It also includes personal investments, money spent on nondurable goods and services.

A high consumer spending index means consumers of the nation are spending more, and it indicates an increase in economic growth. On the other hand, a low consumer spending index means consumers are not spending much, and that indicates a slowdown in the economy. In simple terms, it shows and helps in the prediction of the economic performance of a nation. As it is the key component of the Gross Domestic Product (GDP), many economists use this factor to gauge the forecasts. The spending pattern is often taken into consideration to shape the monetary and fiscal policies for the improvement of the economy.

The United Kingdom held a referendum on 23 June 2016, on their membership of the European Union with 51.9% of voters choosing to leave the EU. Since 2016, the economy of the United Kingdom has been through a lot of ups and downs. A recent survey conducted by YouGov – a British market research and data analytics firm revealed that consumer confidence plummeted to 102.8 in October – which was 103.8 in September. The Britons were resilient and helped the economy grew after the referendum, however, they have cut down on spending in October ahead of the General Election that is on 12 December. According to the Office for National Statistics (ONS), an unpredicted decline in sales in October has driven retail growth to its lowest since April 2018. Earlier this year in July, retailers recorded the worst month in sales as customers sealed their wallets due to uncertainty surrounding Brexit. 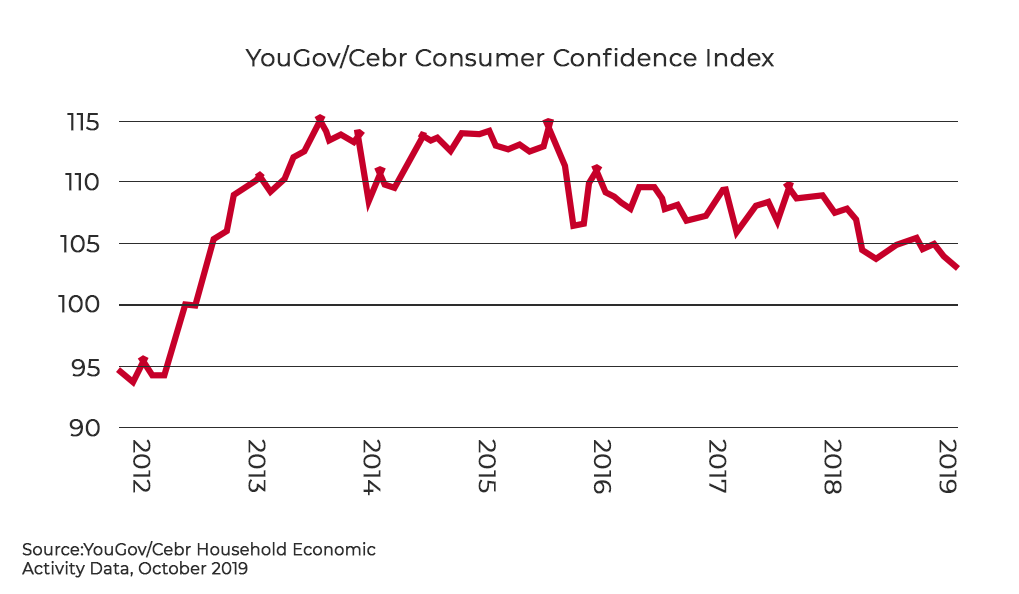 Consumers are wary of purchasing any big-ticket items because of the recent decline in employment and the ever sluggish wage growth. A few analysts had previously predicted that consumers will continue to increase their spending with a 0.1% rise month-on-month considering the large discounts offered on items by the retailers. The only positive development was a 2% increase in department store sales volumes which was maybe because of early Christmas discounts. Borrowings made by Britons using their credit cards in August were at the slowest annual rate in more than 4 years. With consumer confidence sinking low, the UK economy is possibly walking towards a recession, according to a few economists.

Voice of the Consumer

A consumer confidence score above 100 means that there are a lot of consumers who are spending their money to create a thriving economy. However, as compared to the consumer confidence score before Referendum 2016, the score has sunk low. Therefore, consumer-facing businesses may expect a lower demand. This may continue until any significant progress is made regarding the political backdrop – Brexit. The chances of a booming consumer spending index depend upon the developments and negotiations surrounding the nature of the deal. Consumer attitude and buying behaviour will reshape accordingly. Which? – offers informed consumer choice and provides independent advice to the citizens of the UK – has a Brexit tracker – that tracks the consumer sentiment, their perception and the financial impact that the nation may face. 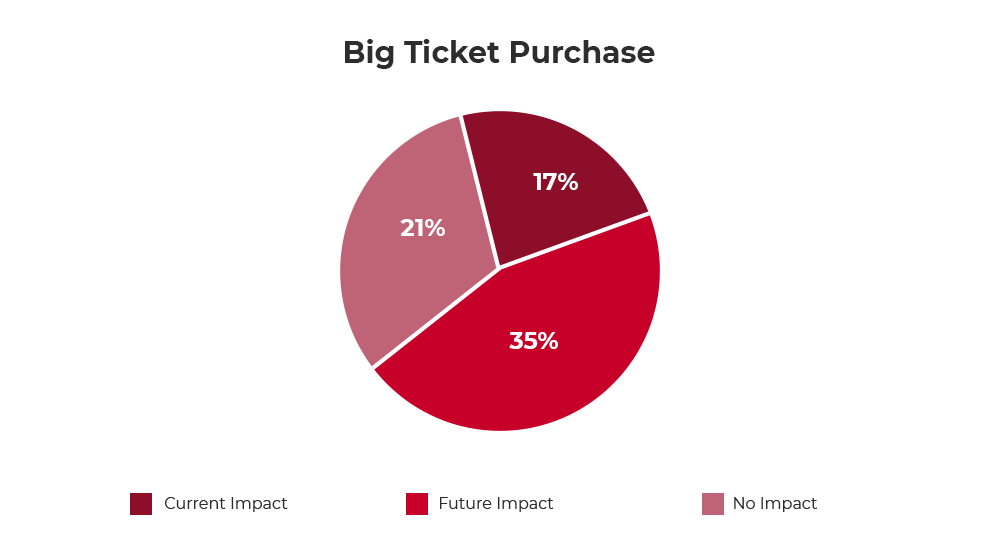 Consumer confidence depends on a lot of factors such as employment, wage growth, savings and investments, cost of living, etc. It is an important economic indicator. It depicts the general state of the economy by measuring the activity and intention of spending.

Everyone who lives in a nation is a consumer because we consume goods and services for our existence and survival. When we buy a product “X”, it generates demand for that product in the market. Companies that produce it fulfils the supply. And because manufacturing a product is a multi-level process, companies need employees. People get recruited and that’s how the cycle runs. This is how consumer spending impacts the economy of a nation.

A few macroeconomic theories suggest that aggregate demand strongly influence the economic growth of a country. When a nation is facing or on the brink of a recession, the government try to stimulate consumer spending to help the economy. Brexit is not the only reason for a low consumer spending index. A decline in wage growth has contributed significantly to the squeezing of consumer spending. The devaluation of sterling has led to an increase in the cost of material goods. Also, consumer debt has been one of the vital factors for the drop. Figures published by the Bank of England shows that there is an increase in the number of defaults on credit card debt at the fastest pace in 2 years.

Prime Minister Boris Johnson has called in for an early General Election to be held on 12 December. He hopes to get a majority to pass the current Brexit legislation before the deadline of 31 January. He believes that this will reestablish business confidence in the United Kingdom. Consumers will start saving more and spend less, after the Brexit. Or they may save less and spend more. It depends on the businesses and the government. If the government can stimulate consumer spending by slashing taxes as Sajid Javid dropped a hint. Forecasting during such sensible times may not help to shape a conclusion until the current domestic political situation comes to a rest. The economy may have to face certain fluctuations before thriving again.

PrevPreviousCollapse of QuickQuid into Administration: All You Need to Know
NextTop 10 Tips for Black Friday and Cyber MondayNext