Britain: From a Nation of “Yolo Spenders” to “Savers” 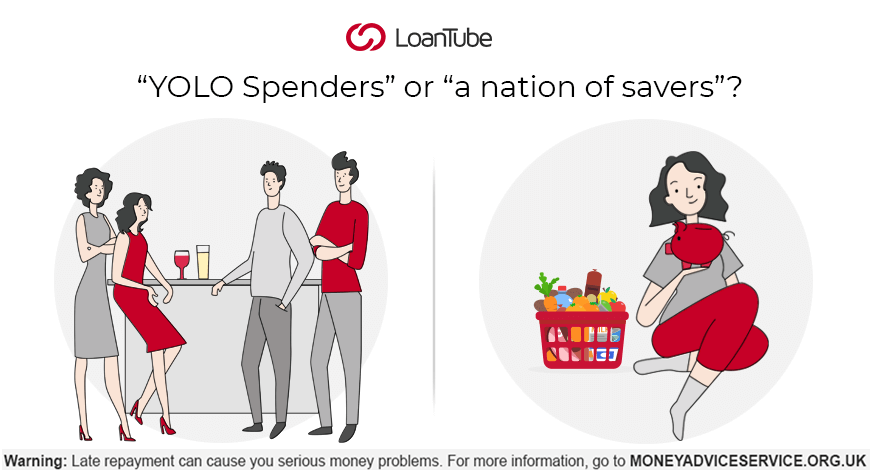 A few years back, Brits were becoming a nation of “YOLOs” while enjoying their life. However, the current pandemic has changed the money spending behaviour of Brits. Right now, the country is about to become a “Nation of Savers”. Has this pandemic tightened the strings of their purse? ⭐COVID-19 ⭐Money Management

The coronavirus outbreak has already annihilated the first quarter of the economy, globally. The virus that originated during the end of 2019, has claimed more than 300,000 lives and counting. Even with the ongoing scientific advancements to isolate this disease, we cannot predict the duration for which the virus is likely to affect us. However, economists around the globe have warned people to tighten their grip over their finances, as a deep recession awaits us all.

UK’s economy has already seen a downfall by 2%, in the first quarter of 2020. The month of March had a major contribution towards this fall, as the government announced a nationwide lockdown. By March, the GDP plummeted by 5.8%. While all industries saw a decline in growth, the pandemic especially jolted the hospitality and F&B sector, by a decrease of almost 9.5%. This has been the worst contraction since 2008, where major economies of the world sank owing to recession.

As a result of this contraction, employers are forced to either furlough their employees or slash their pay, to survive this ripple in the economy. Consequently, people have to depend on their savings to push through the months, until normal routine begins. Given this scenario, is the nation of ‘YOLO spenders’ on the verge of becoming a nation of ‘savers’?

Current Situation of Employment in the UK

As per reports, over 6 Million people have been furloughed. This implies that under the Coronavirus Job Retention scheme, people are securing a salary of 80pc of their actual pay. With the cap set at £2500 per month, people earning more than this amount are experiencing a greater cut in their pay. The government also witnessed a rise in requests for the ‘Universal Credit’ benefit, which pays up to £94.25 per week. If we set these government aids aside, do people have enough cash to depend upon?

Almost 1 in 3 people, have savings of less than £1500, while approximately 9.05% have no savings at all. A whopping 40.93% of Brits, don’t have enough savings to last for a month, without regular income. Of the people who actually have some savings, 35.6% have had to use a major chunk of their savings ever since the lockdown in March.

Britons are expected save a total of £4.6 Bn during every week in this lockdown. When broken down, this comprises of approximately £54.67 saved on leisure activities, and an additional £44.78 on commuting expenses for people working from home. Therefore, on average, a person working from home is likely to save almost £99.45 per week. Over a period of 3 weeks, these savings will amount to approximately £300.

What is Influencing these Saving Patterns?

In order to get a better perspective into the current saving culture, it is important to understand what factors have an impact on people’s spending habits. The two major contributors are:

Lack of Choice, Owing to the Lockdown

During the initial phase of the lockdown, all shops, pubs, restaurants and business were instructed to temporarily close. As only ‘essentials’ were available on the counters, as well as online, there was a decline in the usual spending habits in the UK.

Due to a Financial Setback

The government showed quick and effective thinking in an attempt to rescue the economy. However, there are still a lot of people who lost their jobs and are unable to benefit from government-funded schemes. Until they receive the help they’re entitled to, all they have to rely upon is their savings. For furloughed workers, and employees experiencing a pay cut, it is imperative to save so that they have enough money to fall back on, during a rainy day. People will resort to this precautionary saving as they fear a second economic shockwave, as the virus may strike its terror again.

Social distancing is and will likely be affecting consumer behaviour for quite some time. More than half of people are apprehensive about returning to public places like gyms, restaurants and pubs alike, to avoid the risk of the disease. A prolonged economic downfall may be an aftermath of this fear of consumption that Covid-19 has invoked.

With the increased risk of infection, people have shown reluctance towards products from across the borders, with ‘too many hands touching them’. This translated into the fact that there may be an increment in the price of products for shoppers, owing to this wave of de-globalisation. Combined with the nationwide cash crunch, this could be a major factor contributing towards a more sensible spending culture.

The post-pandemic period also saw an increase in online shopping, with heavy investments in grocery, exercise equipment, loungewear and beauty products. Interestingly, people have drifted towards premium brands, in lieu of high street fashion brands. For retailers, however, social distancing plays a major role in the drop in sales.

The current circumstances have certainly made us realise the importance of saving some extra pounds to cover costs during a crisis. However, economists analyse how long this shift in consumer behaviour is going to last. Some believe that while people are will judicious spenders for the most part of 2021, it is unlikely that the pandemic will cause a permanent change in their spending habits. Some rightly argue that the people with lower wages, who spend up to their limits, may not even have room for savings. In such cases, it is important for people to at least have a regular source of income.

A rise in overall savings during and post-crisis is inevitable, as people will want to pull themselves up and fix the damage. However, is this pandemic enough to turn the Brits into cautious spenders? Or, are will they retrace their path to their pre-crisis spending, in the coming years?

We understand how difficult it can get to save money while stocking up for the family and paying bills. We have curated some tips and tricks to help you maximise your savings and get you through this pandemic. Check our Blogs to learn how to effectively manage your finances and share them with your loved ones to help them too.

PrevPreviousHow to do Rate Shopping for Cheap Personal Loans?
NextThe 2020 Crisis: Where is the Economy Headed?Next